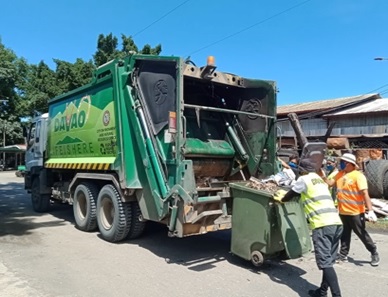 For the year 2020, teams of CENRO’s IECC Personnel have conducted a total of 115 orientation/seminars regarding Davao City’s Solid Waste Management Program to Schools, Establishments, and Barangays within the City which was participated by approximately a total of 1,620 persons. The teams have also conducted a total of 202 visits to their assigned Barangays in order to monitor as well as to guide the progress of the Barangays in achieving their Solid Waste Management Programs. Also, teams of IECC Personnel have distributed to business establishments, schools, and Barangays a total of 1,024IEC Materials such as posters and brochures which are informative and educational. The IECC Personnel have also participated in Waste Analysis & Characterization Study (WACS) in order to gain insight especially on the current figures related to the volume of waste which is generated within the City. As part of the regular tasks of the IEC, they have facilitated the issuance of Solid Waste Management Certificate for a total of 41,086 businesses in Davao City prior to their compliance with its requirements.

Anti-Smoke Belching Unit (ASBU) and Anti-Littering Enforcement Unit to several strategic areas within the City to monitor and apprehend violators of the City Ordinance No. 0361-10 which is known as “Davao City Ecological Solid Waste Management of 2009” and City Ordinance No. 0280-06 or the “Anti-Smoke Belching Ordinance of Davao City”.For the year 2020, CENRO’s Anti-Littering Enforcers have apprehended a total of3,265 violators of the C.O. 0361-10’s prohibited acts. This apprehension is done to instill discipline especially on the proper waste practices that must be observed. Meanwhile, Anti-Smoke Belching units from CENRO have also issued a notice of testing and have conducted emission testing of 3,585 vehicles during the year 2020. Vehicles within the city must be monitored and apprehended to reduce the emission of air pollutants generated by such vehicles.

As part of enforcing cleanliness within Davao City, the City Environment & Natural Resources Office have deployed many street sweeper personnel which is responsible for clearing the litter and dust on the roads and streets. A total of 250 kilometres of road and street are swept regularly.

The most common task of CENRO is the collection of waste from its generators and its proper transportation to its designated facilities for its final utilization or disposal.

The City Environment and Natural Office began its collection of used cooking oil from a number of business establishments such as fast food and restaurants. The cooking oil will be transported to the Bio Diesel Facility of the City to be processed into fuel that can later be used to run the vehicles and equipment by the City Government of Davao. A total of 27,158 liters of used cooking oil was processed in the Bio Diesel Facility for the year 2020.

CENRO handled a special collection of biodegradable waste from public markets which will undergo processing at CENRO’s composting facility. In order to divert waste into something useful, it is ideal for materials such as biodegradable to be utilized as nutrient-rich soil which will be essential in growing crops. CENRO’s composting facility has produced a total of 2,619 sacks of compost which will be utilized by the plant nurseries owned by the City.

During the year 2020, a total of 201,306.82 tons of waste have been collected and properly disposed of by the City Environment & Natural Resources Office to its designated Sanitary Landfill Facility. The office has taken proper measures in order to secure such waste from uncontrollable pollution of the environment especially the water sources of the City’s inhabitants. As mandated by the City Ordinance No. 0361-10 or the “Davao City Ecological Solid Waste Management of2009”, the City ENRO shall be responsible for the collection of residual and special waste, thus the waste generated by the homes within the City must practice segregation in order that only the residual and special waste will be disposed at the designated collection points near the generator.